These are the different names that one of my favorite animals is known by. 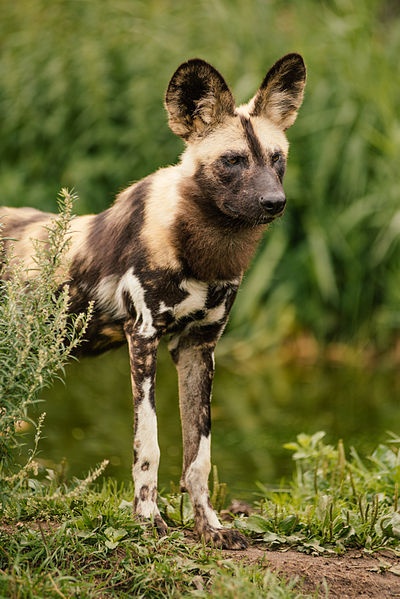 Following them when they were hunting in Northern Botswana were some of the most thrilling experiences of my life. They can run up to eighty kilometers in a day and will run an animal down over ten kilometers without breaking their pace. The animal is singled out and the pack will run right by other animals so focused are they on their intended quarry.

We would race along, trying to keep up with them. The end though was often hard to watch and hear as they will literally tear an animal to pieces. Still, it is very quick, especially compared to other large predators. I have watched lions slowly eat a buffalo from the rear while it is alive.

They are incredible animals. Although brutal killers, the pack are incredibly close. Animals will stay behind to look  after sick dogs and the pups. All these animals will be fed by others regurgitating meat when they return from the hunt. There is group interaction for every event. Before hunting they will psych each other up with growing excitement.

Walking up to them is always an incredible experience. I like to lie down and throw my hat in front of me. They are incredibly curious and will run up and check you out, sniffing the hat.

I have only once seen a completely silent group of wild dogs. All unmoving. They were in a fenced area at the Artis Zoo in Amsterdam.

The pen was clean. The dogs were well fed and healthy, but their behaviour was all wrong. There wasn't any behaviour. They all just lay in the small area and stared at nothing. As thrilling as watching them hunt was, this was so sad.

I feel the same way when I look at the fat, unfit lions or bored primates.

I can never like a zoo. However, I will tolerate and even help them because they are, in today's world, a necessary part of ensuring the continued existence of many species that are or soon will be extinct in the wild.

They are not, however, in any way a normal or wonderful thing. They are to me, a sad necessity. A world where the wild is contained behind bars is a sick world.

4 thoughts on “What is your opinion on zoos?”